From The Road: Opening Doors to the Outdoors 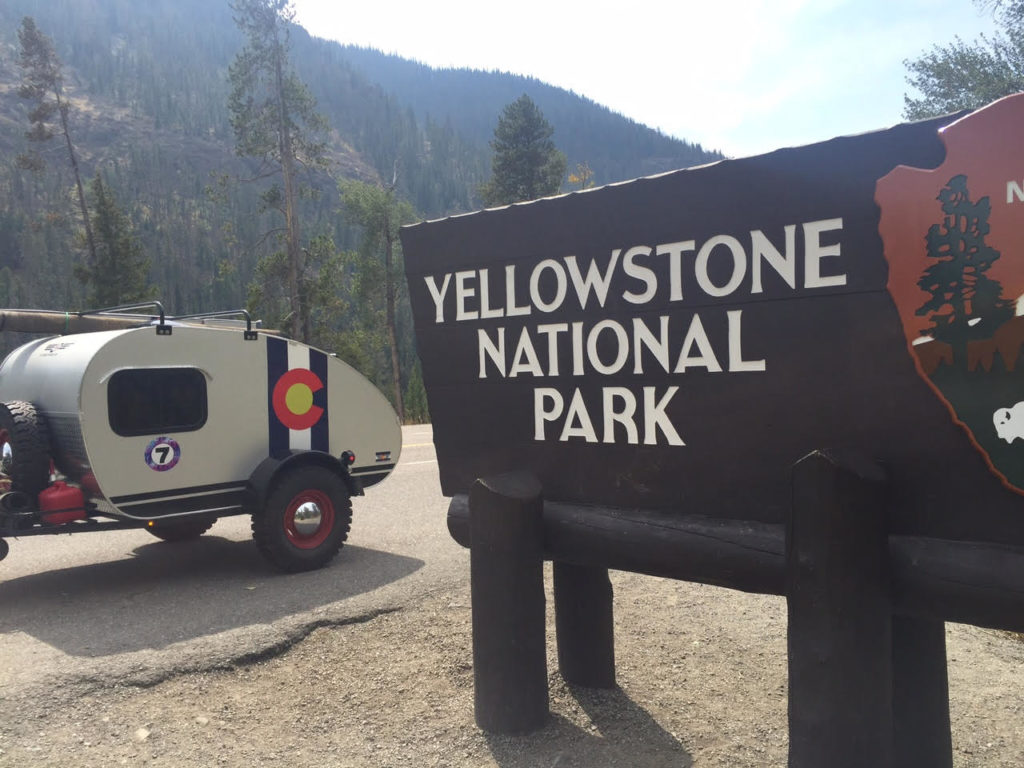 I moved to Denver, Colorado in April 2013 after no small amount of soul-searching. I had lived in Pittsburgh for all of my adult life, but I it was time for a change. As I looked at major cities (I needed to be a non-stop flight away from Pennsylvania for family reasons), my gaze kept falling to the West. San Francisco was too expensive to live, even though I had family there. Seattle was too rainy. Denver? Sure. It fit all of my criteria, and it opened up to me a segment of the West that I had always wanted to explore.

After living in Denver for just over 2 years, while returning from one of those family responsibility-fulfilling flights to Pittsburgh I was perusing the September 2015 digital edition of Outside magazine. I had been thinking of getting a small camper as a means of exploring my new environs, but I hadn’t done much beyond investigating dry weight and towing capacity, chagrined that I probably would have to buy a new tow vehicle. But somewhere over middle America, there in front of me was the sharpest, coolest, most awesome retro camper I could ever have imagined. And it was built by hand, in Grand Junction, Colorado! The title at the top of the page? “COVET”. Almost immediately, I did.

While ruminating for several weeks (people tell me that my decision-making process is ultra-cerebral that way), I frequently returned to that digital page. Covet. When a beautiful Fall weekend was approaching in late September, and work was light, I decided it was time to make a little road trip. I emailed Vintage Overland and I asked if I could come to Grand Junction and see their caravans in person (I had looked at some boxy ones already, as well as some that were mass-produced, complicated, and not that reliable from what I was hearing from existing owners). I convinced myself this was primarily a trip to do some hiking with my dog, with the ancillary benefit of seeing the teardrops in person, and I set off, with an appointment to stop by mid-morning on Saturday.

When I met Britton Purser, I was impressed with the story of how he started making teardrop caravans after sketching one out on a napkin. He was an entrepreneur, having stumbled into this still nascent business through a lifetime of experience as a craftsman (not only him, but his brothers as well). He showed me a caravan or two in process. We sat in one as he told me about some of his customers and their experiences. “There’s this couple that pulls their caravan with a Subaru, I think it’s even smaller than the car you have there”, he said. But I had done the math so I already knew I could tow one with my existing car. “Covet” was turning into, well, I don’t know what the next stage beyond covet is, but I was already there. Within a couple weeks I had sent in a deposit, and late April couldn’t come soon enough so I could pick up my own Vintage Overland teardrop caravan. 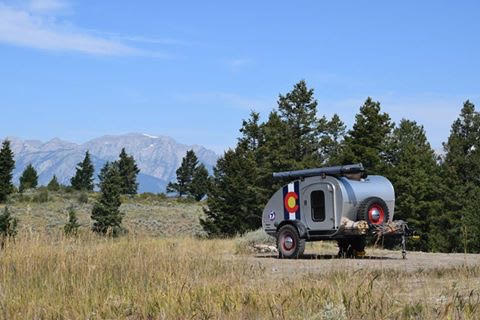 After taking delivery I went on several short camping trips, exploring areas within a few hour’s drive of Denver. Generally I headed West or South. Both routes took me over mountain passes, and the caravan tracked faithfully behind my Forrester. I felt like a veteran teardrop camper now, and the 100th “birthday” of Yellowstone Park was coming up in August. With a reservation in hand for the anniversary week, I set off for 9 days’ vacation. A couple of nights in the Grand Tetons outside of Jackson Hole, WY were in order first. A bumpy dirt road through the National Elk Reserve and a climb up some switchbacks to reach my campsite? No problem. As during my other, shorter trips, the caravan sailed along behind my car. I wouldn’t say I didn’t know it was there, but I will say that it was as if it had been born to be mated to the car. 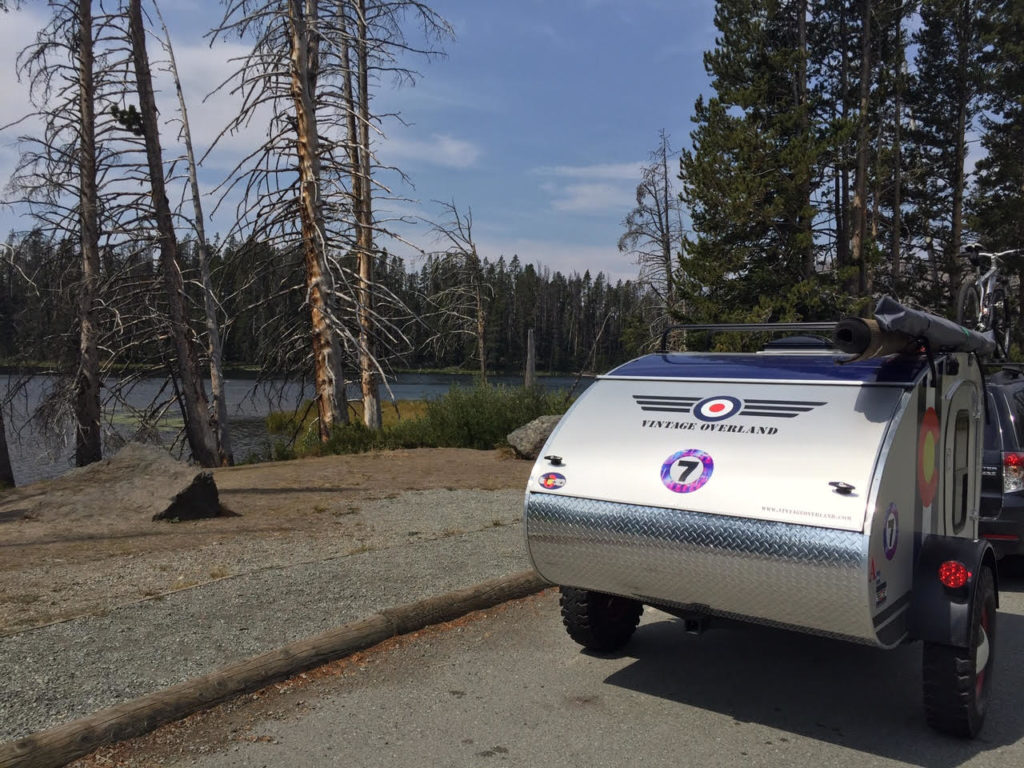 From my hilltop off-grid campsite outside of Jackson (with a view of the Tetons, I might add), I managed to get enough of a data signal the night before driving up to Yellowstone to learn that the South entrance to the Park was closed due to fires within Grand Teton NP. Several messages online, and several emails from a friend back in PA, were warning me that Teton Pass was brutal. I had no choice, so I set off around 10 a.m. the next morning, prepared for my 2-hour-turned-6-hour drive over Teton Pass, into Idaho, and into Yellowstone’s West entrance. As I turned out of Jackson, WY, within a few minutes I could smell the overheated brakes of the cars, trucks and RVs coming down from Teton Pass as they passed me going the other direction. I gripped the steering wheel, selected a relaxing playlist, and though I did not break any speed records, I did manage to maintain a solid 50-55 mph, and the caravan sat squarely behind my Forester and never complained as we safely traversed the 10%, 8,400-ft. pass. Teton-schmeton. I was on my way to meet a Seattle friend in Yellowstone and spend 5 wonderful days exploring its natural wonders. With temperatures dipping to just freezing most nights, we were cozy inside my caravan. Several curious passers-by asked for a closer look, and I gladly welcomed them to a “tour”. I had become accustomed to sating the curiosity of strangers since my first refueling stop a few months earlier (2 couples had asked for a “tour”, and one through-hiker who was hitching a ride back to his car shot me a “rad, dude” accompanied by a thumbs up, or maybe he was asking for a ride…

After 8 days on the road, I left Yellowstone through the East entrance (the fires subsided and the South entrance re-opened 2 days later—the same day I arrived back home in Denver), and I relished the wonderful scenery of Wyoming, with an overnight stop in Laramie. As I was approaching Denver, I did the math: I was going to fall short of 2000 miles by about the distance of a round-trip to the Denver airport. About 1300 of those were towing miles, and I enjoyed all of them, and didn’t want the trip to end.

Thank you, Vintage Overland, for opening doors to the great outdoors for me.